One man’s battle to make sense of the legal system and community advocacies that feed off it.  At different times this man turns to government institutions designed to provide a safety net for the handicapped and vulnerable and is failed repeatedly. He fights long battles to get lawyers to give him simple information and to fight his case. He struggles with mental illness, painful disabilities and a failing body.

Despite this he continues moving through a landscape that is bitterly corrupt. He looks at the “safety net” organisations from the point of view of a client and sees them fail. He asks the question. “Can someone who is ill, elderly or mentally disabled negotiate this space?” The answer is a resounding NO much of the time. He falls foul of corrupt or inept lawyers and Police and other public servants and becomes disheartened by the contempt that officers of the law have for it’s disciplines. The corruption becomes so prevalent that he has to lock the public out of his posts until he can find some way of exposing events without leaving himself vulnerable to very powerful people and organisations

He often suggests to people he faces that they are dealing with a very ill and vulnerable person and is shocked by the contempt his condition is shown and even pleasure in causing harm. He thinks of all the vulnerable people who will lose any chance of redeeming their lives in the maelstrom of selfishness and hopes that someone will read this and find information they can use to make things different. 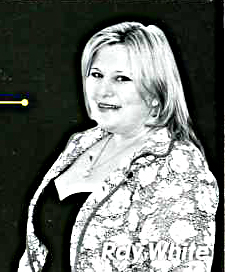 Wendy McLeod after a little Photoshopping. She tried to salvage some reputation at this time by releasing flyers that showed her to be compassionate.

Central Coast business person Wendy Mcleod of Budgewoi was handed hundreds of dollars from the victim’s compensation scheme despite having confessed in open court that she was injured during an assault where she punched  a handicapped tenant in the face and kicked him several times in the groin while he was held by members of her staff.

The tenant made his own way to the hospital and then fought a two year battle where his private records were handed to lawyers supporting Ms Mcleod, subpoenas disappeared and reappeared but were never served despite being stamped by the court. Witness statements and Ms Mcleod’s own statement changed each time she found the tenant had caught her out in another untruth. The court agreed that the tenant had a winning case for self defense but would not agree to dismiss the case as being skewed unfairly against the tenant due to all the anomalies. He lost the case on that basis alone and is looking to publish the story and all the documents, film and images online soon. During the court battle the tenant was accompanied by members of the Aged Disability Support Services because he was unable to travel alone. He spent time in a refuge at Wyong after McLeod put him out on the street and was given emergency government housing when it was realized his life was in danger in the refuge and landscape of homelessness