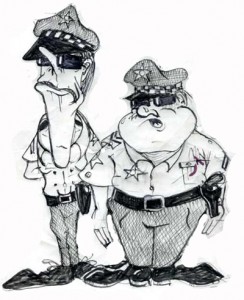 The documents I call the Antecedents are called that because that is what is written as a title on the front page. When I brought it up in front of Magistrate Day of Wyong Local Court he made a great fuss about the word. His understanding of the term may be multiple or it may be different but whatever it is he treated me like a fool when I used it. He even rolled the word about in his mouth enunciating it loudly and then asking what I meant before dismissing me half way through a sentence as I held up the paper. I am no closer to understanding what he was talking about except that he was wallowing in superiority because he knew a term I didn’t. I do not know of anywhere else where such supercilious behaviour is the norm but it is absolutely day to day fare among the legal community at Wyong. They seem to forget I am as well educated as they are and have just as many specialised terms as they do. I just do not see why it makes me better than someone with a different educational speciality or none at all. Specialised words are tools I use among other artists and naturalists and for every level I reach there is another guy with a whole bunch of words I never learned. I do not expect him to crow in my face any more than I would to him when he finds one I do not know. Imagine if I was not educated, Those guys must really get bullied.

The document which is titled “The Antecedents” was given to me by the Police when Wendy McLeod (I say that as Mac Clod) gave them a statement accusing me of assault. It is allegedly that first statement. It is very interesting for a number of reasons not the least being that the behaviour of both my defence and the Police over this document have set the tone for the whole case.

This document, called the Antecedent, was created in a concrete bunker that is the latest and greatest Police building at Wyong. It is climate-controlled with comfortable seats and new computers and keyboards and is well insulated and far from traffic noise. You would think we might get an accurate account of what happened when the witness describes her account in there. Or you would be entitled to think that the Police were capable of taking an account accurately when they are in the best possible environment. You would be wrong on both counts.

The document the Police called “the Antecedents” indicates very clearly that Wendy Mcleod was lying and did not have a clue what went on at her office up to moments before the Police arrived. Along with the various CCTV the document called “the Antecedents” was a strong bit of evidence for my defence. Once again we are wrong. After I had waved this document in front of David Spencer Lawyer from Erina he told me to forget it because the Police would simply say they had taken down the information incorrectly. When I tried to test that in court and the magistrate and the prosecutor had finished laughing their irritating ‘we are superior human beings and you are stupid‘ laugh they wrote on the document the text they thought I was interested in and then handed it to me dismissively. If they had asked I would have informed them that I was not interested in the text they wrote or what it was about. Who is stupid now? Ass-u-me. Remember?

Everything the Police have added to the case is like this. If I find it useful it is suddenly made to look as though it has no weight and should not be used. If it incriminates me, and less and less of it does as we strip the bullshit out, then it is written in stone and even my own lawyers use it against me.

That covers my court notes for this session. I will move it all across when the new journal is up. For notes about today.

I am freezing and absolutely desperate to heat the house or find a place that sells real, cold-weather clothes. I cannot heat the house as it will make me too sick just moments after I close all the doors and windows. The other choice would be an old-style bar heater with just bare elements to sit in front of until I get warm. I do not think they make them any more. The big Vulcan heater is beautiful in a closed apartment but it just heats a steel plate and runs air over it which I wouldn’t even notice in here with doors and windows open.

The air mattress I have been sleeping on has developed a slow but increasing leak and it leaves my butt on the floor by about 6:am in the morning. I will have to get another one of those as they are cheap ($12) until I can get to a camping store and then I have plans to make a bench bed that will fit in place of the huge lounge sofa some time in the future. I will be able to lay on it and watch television instead of staring at the bottom of the mobility scooter as I do from my bed on the floor now! hurray.

I have to talk about the positive things Karen Wilson and the Legal Aid teams have done for me over this period. If I don’t it will all look very negative and they done some very commendable things to get me through this.